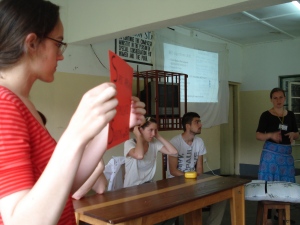 Another busy week on Toto Ward doing ward rounds and reviews, we had a new case of a child with tetanus (something I’d only read about in the UK!) which is difficult to manage on a busy ward, as ideally the child should be isolated in a dark room (to prevent the child having spasms caused by loud noises/shock) and regular doses of muscle relaxant (the tetanus toxin causes horrible symptoms of overstimulation of the muscles, causing lock-jaw and spasms, while the child is fully conscious and in a lot of pain), it was difficult to create a quiet environment, but I was able to make sure she was in a bed by herself and got regular muscle relaxants. She has been gradually improving and is not having any respiratory problems, which can occur.  I also spent a lot of time on maternity with babies with neonatal eye infections, pneumonia and some premature infants who needed support with feeding. This week was also our first CME (continuous medical education) teaching session with staff from all departments – we went over basic life support and emergencies in children and adults. I was helped by the group of Belgian Medical students, we tried to make it quite an interactive session with demonstrations of CPR technique and management of choking. There was a big turn out, and everyone seemed to enjoy watching the medical students acting skills! As it was such a large group, the medical students have been arranging small group catch up sessions, to go over the practical skills and give everyone a chance to practice, which has been really helpful, as I have been busy on the wards.
(sorry a bit of a short report, as I need to catch a boda-boda taxi from Kasese, where I can use the internet, back to the hospital and I want to get back before dark!) 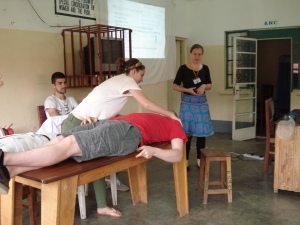 There was quite a lot of commotion and panic as there had been serious flooding in 2013 and 2014 with the loss of lives and damage to hospital buildings (as some of you will know from Dr McWhirter’s previous reports). Fortunately, the water didn’t come too high and no-one was injured. The children are in a temporary ward. The silver lining of the circumstances has been a chance to paint the children’s ward with some colourful cartoons in our spare time (myself, along with some Belgian nurses and medical  students who are also currently in Kilembe – a healthcare team with an artistic streak!).

On Monday morning I had found a tiny baby (weighing just under 1000 grams, with an estimated gestation of 28 weeks, she was a twin, sadly her sister had been stillborn) in one of the incubators on maternity ward, unfortunately the incubator was turned off so the baby was cold and too small to suckle and had not been getting any nutrition since birth. One of the Belgian nurses also specialises in paediatrics and neonates, and between the 2 of us we cleaned the incubator, turned it on and placed a nasogastric tube to feed baby. Tina the Belgian nurse bought some formula milk and bottled water, so we prepared the milk in our guesthouse and took it over to the hospital when needed. On day 3 the baby developed some respiratory distress, and needed CPAP via bag and mask and IV antibiotics, after this we had thought that she wasn’t going to make it and Tina held the baby and gave oxygen while we called for mum, but amazingly the baby opened her eyes and let out a little cry and kicked her legs- she was a wee fighter. Over the next few days we managed to get some kangaroo care time with mum (placing baby between mother’s breasts and then wrapping mum and baby with blankets). But on Saturday, baby developed another episode of respiratory distress and  on Saturday evening I had to help her with her breathing again, when I went home in the early hours I knew she was touch and go. Sadly, when I went to check on Sundaymorning, the incubator was empty, the baby had died early on Sunday morning. It was sad, but such a small baby really needed continuous ventilator support and regular nutritional feeding (often her overnight feeds were missed by the midwives) and neonatal ICU care, but the fact that she survived for a week after we found her cold (temp 32 degrees) and not having been fed for almost 12 hours, was quite remarkable. And it was good to see some of the midwives and students getting interested in the care of the baby. There seems to be a bit of an idea that the incubator is a “magic box”, that when a baby is placed inside with oxygen prongs, that is enough treatment. But we were able to give some education about the need for regular feeding. monitoring of temperature and disinfecting/cleaning of the incubator. It’s certainly an area where I can do more teaching. On the topic of teaching, I have been doing more neonatal resuscitation teaching , and I have been asked to do some basic life support teaching (adults and children) at the hospital teaching session next Wednesday morning.

I will try to send an update next week.
28th June The latest report and photographs from Katie Gordon. 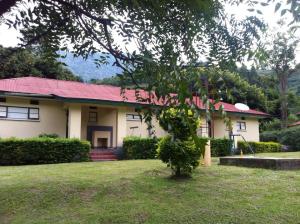 Week 1: I spent most of my time on Toto (paediatric) ward, doing ward rounds and reviewing sick patients throughout the day. I also spent time in OPD (outpatient department – a combination of GP clinic, Accident and Emergency and Outpatient clinics) seeing patients of all specalities with a nurse translating to and from the local language. I also spent some time in theatre and assisted with operations in children and adults, including caesarean sections, colorectal surgery and paediatric orthopaedics. Additionally, I was trying to talk with nursing staff on Toto and maternity ward to find out what their roles are (they do a lot of jobs that doctors would do in the UK, such as venepuncture and procedures in children and reviewing sick patients when the doctor is off-site) and trying to find out if there is any teaching/learning I can help them with while I am here.

So, it was a busy first week, with culture shock in and out of the hospital, as I’m sure you can imagine, a children’s ward in Uganda is very different to one in the UK. The official bed number is 30, but most days there are 10-15 extra children, either 2 children to one bed, or extra beds made up in the corridor! And the acuity of sick children is quite overwhelming: cases of severe malaria, tyhoid, pneumonia, osteomyelitis, abscesses and severe burns crammed into a general ward, when many of these children require high dependency or even intensive care level treatment and monitoring, sadly the staff and equipment just aren’t available… So, it was a very busy first week finding my feet!
Week 2: I spent some time in the hospital overnight when the nurses called me to review a sick patient. After reviewing the patient and adjusting her treatment, I heard that there was going to be an emergency C-section, so I went along to theatre to see if I could help. I ended up assisting the midwife, which was much needed, as it turned out it was a twin delivery and there was only one set of rescus equipment and one midwife, so an extra pair of hands came in very useful, and though it was far from ideal having to share equipment, between us, we managed to resuscitate both the babies, put in IV lines and start them on antibiotics, they are both now off antibiotics, doing well and have gone home. The rest of the week was spent on Toto ward, I felt like I was getting into the swing of things more, armed with my copy of the “WHO Pocket Book of Hospital Care for Children”, I am starting to learn off by heart the doses of antibiotics for pneumonia, zinc and ORS for diarrhoea, and artesunate/co-artem for malaria. I was learning more about the lab and what tests are available (Yes: Full Blood Count, Malaria Blood Film, Group and Hold; Yes, but send to Kampala and family have to pay: LFTS; Very tricky/expensive to arrange: Urea and Electrolytes; Not available: Blood Cultures). And I was also learning the arrangements for organising Xrays and Ultrasound – early in the day: should be OK; late afternoon: the radiographer may have gone home, come back tomorrow. I had been speaking to the nursing staff about doing some basic life support/ recognition of a sick child training, as I can see that this is an area where the nurses need more support, I tried to arrange a teaching session, but it ended up being too busy on that day, with lots of acute admissions, so both myself and the nursing staff were not able to attend. I spoke to the nurse manager for the hospital and I have decided to focus first on teaching the midwives neonatal resuscitation and hopefully teach paediatric life support to the nurses at a later date.

Week 3: this week, I felt I made a bit of a breakthrough with the teaching, we held the first newborn resuscitation teaching session in the midwives changing room (bit of a long story, but the planned room became unavailable at the last minute!), which was a bit cramped, but we managed to go over the basics and had all the midwives practicing on a mannequin and they all seemed to enjoy it, which was great! The matron has requested more sessions, so I am going to run some more sessions again next week – in the changing room, our new “classroom”! Sadly, it wasn’t such a great week on Toto ward, with a high death toll, 2 children died after bowel perforations, both had presented late and died following surgery. Another child died shortly after arriving on the ward, who went into septic shock from septic arthritis. And after trying to do CPR with broken/missing equipment and nursing staff not having up to date training, it made me really see how important this training is, so I am going to speak to the nurse manager again about arranging time for me to teach BLS with the nurses.

Katie Gordon was brought up in a small village in Aberdeenshire.  She studied medicine at Aberdeen University and graduated in 2011.   After graduation Katie worked as a junior doctor at Glasgow Hospital.  Katie then spent some time in New Zealand working as a Senior House Officer.  On her return to UK, Katie studied for a Diploma in Tropical Medicine and Hygiene at the Liverpool School of Tropical Medicine.

Katie has already carried out voluntary work in Sri Lanka and Nepal as well as doing her medical elective in Malawi, she is looking forward to visiting Uganda and has a strong desire to work in paediatrics in a developing country, where child and maternal morbidity and mortality is disproportionately high, with the majority of under-5 deaths being caused by preventable infections such as pneumonia and diarrhoeal illness.  Katie hopes to be able to share what she has learned at the Liverpool School of Tropical Medicine with healthcare professionals in Uganda.

When Katie returns from Uganda, she will be starting a specialist course in Paediatric Medicine in Scotland.

Katie will be sending reports on her time in Uganda, please look at the website to read her reports.