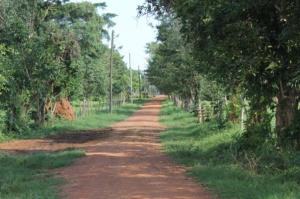 Situated half way between Jinja and Iganga and only 5km from the main highway where heavy lorries rumble through backwards and forwards from Kenya to Kampala at all hours of the day and night Buluba seems a world away.

St Francis Hospital was originally set up on a 700 acre site as a Leper colony in the 1930’s by the Franciscan nuns on a peninsula overlooking Lake Victoria. Most of today’s hospital was built in the 1950’s and 1960’s with aid from the German Leprosy Foundation and during this period the hospital was an internationally renowned centre for the management of leprosy and TB. In its prime it must have been a very impressive place with its open wards, old people’s home, church, a school,  an educational centre, a large dairy farm, and an occupational unit to provide work for the long stay patients.

Unfortunately over the years as the number of leprosy patients has declined so too has the funding for the hospital and so the buildings  have gradually deteriorated with few upgrades or improvements since that time and the place is now looking somewhat worse for wear.

Since 2002 the hospital has become a general hospital serving the population of the villages that line the shores of Lake Victoria. It now has an Out Patients department, a male ward,a female ward, a childrens ward and a maternity unit. Medically it is staffed by   four fulltime doctors and four clinical medical officer’s ( although very competent they are only trained to diploma level),an anaesthetist and a couple of anaesthetic assistants. They undertake over 1000 deliveries a year of which 50% are caesarean sections.

Whilst I was there I did not find the hospital particularly busy and one of the main reasons for this is that the local population struggle to pay the small fees the hospital has to charge to make ends meet.

The local population live a very basic life as subsistence farmers or fisherman most are only semi literate and don’t understand the importance of basic health care struggling to get by on a day to day basis without having to pay hospital fees.

On the children’s ward severe malaria, and malnutrition make up the bulk of the cases with the occasional case of Tetanus ( what a horrifying and such an easily preventable disease)

Approximately 10% of the population have HIV and the hospital runs a district wide ARV treatment ,education and counselling service.

I had never worked in Africa before , however I expected the poverty, the bureaucracy,the power cuts ,the beans pochu and rice, the nonexistent  IT system and the cold showers but what shocked me was the shortage of blood ,the lack of essential drugs in the pharmacy ,the lack of dressings and supplies ,the dodgy anaesthetic machine and the lack of reagents to carry out tests in the laboratory.

Working in such a resource poor environment is certainly challenging and I was very impressed by the total dedication and the willingness to try and give it a go even when the resources were unavailable. It is very difficult working on a woman with a perforated uterus and a Hb of < 2 with no blood or an elderly woman with a bowel obstruction due to a large tumour who needed a defunctioning colostomy with no colostomy bags. 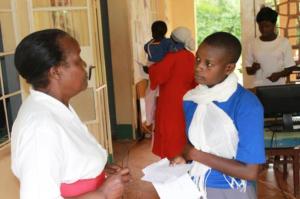 I had an amazing time, a fantastic experience saw a huge amount of tropical diseases met some wonderful people and was looked after incredibly well by the staff at the hospital. However with my limited knowledge and understanding of their illnesses and without any of the local languages I can truthfully say that my attachment was more of an educational and learning experience for me rather than of me being much help to them.

Would I recommend the experience to others , yes definitely .Would I go again myself, -possibly I would certainly feel that I could be of much more help and benefit if I were to go again .Five weeks was definitely not long enough.

Can I take this opportunity to thank everyone who made this trip possible for me ,Rotary Doctor Bank ,Mansel Thomas, Dr Rogers Kabuye , Dr Jim McWhirter and most importantly Sister Harriet and all her staff at Buluba.

Below are pictures of my accommodation(which was much nicer than the local doctors):

Our latest volunteer is Dr Neil Robertson, who arrived at Buluba Hospital, Uganda on 20th June.

After spending 25 years as  a GP in Nottingamshire, Neil moved to New Zealand and spent 9 years in a challenging deprived Maori community.  On his retirement, Neil moved back to UK,  since then he has spent a short time as a locum in New Zealand as well as taking part in a medical expedition to the Amazon.