This visit to Kamuli was a follow up to my time spent last year helping to improve the x-ray service.  This time I was accompanied by two colleagues from Chester: Jane Cheveau, a fellow radiographer and Dr Anne Boothroyd, a radiologist specialising in paediatrics.

After the initial visit in 2017, areas were identified where we felt we could help with the x-ray and ultrasound services.  The main focus was to introduce an automatic film processor and to install a variable height chest stand.

The film processor has a number of advantages over manual developing of films, the main ones being the standardisation of exposure and the improved quality of the images produced.  There is also a health and safety aspect as it limits the amount of time an individual is in contact with potentially toxic chemicals.

These processors are becoming increasingly difficult to find in the UK due to hospitals having computed/digital imaging now, but we managed to find a vet who kindly donated one to us.  We are lucky to have a contact, Graham Haslam from Wolverson X-ray, who kindly serviced and packed the processor for us and gave us comprehensive instructions on how to assemble it once we arrived in Uganda.

Graham also donated a chest stand and suggested a method to adapt it for use in Kamuli, with variability being achieved by the use of brackets screwed on the wall at different heights.

We were also contacted by Helen Hughes, a retired ultrasonographer, following publication of an article written for Synergy, a radiography journal, about last year’s visit.  Helen had a portable ultrasound machine with Doppler, which she offered to donate to Kamuli.

On arriving at the hospital, we were dismayed to find that the Ugandan Atomic Energy Council (AEC) had shut down the x-ray department and chained up the X-ray tube.  This has happened in March so the hospital and the district had been without X-ray facilities for 4 months and patients therefore either went without X-ray or had to travel to Jinja, one and a half hours away, which was an impossibility for patients in a critical condition.  We read through the report from the AEC and used this to focus our efforts effectively during our time there.

The hospital had started to implement some of the recommendations, including a lead lined door at a cost of $2,000.  They had also increased the thickness of a shared wall between X-ray and the lab next door.  This had been a concern on the previous visit as a major radiation protection issue for the staff working in the lab, so it was a relief that this had been addressed.

We proceeded to assemble the processor, which unfortunately had been slightly damaged during transit, but was fixed with a little superglue! 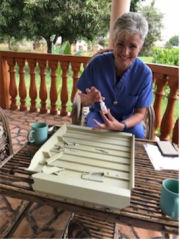 After a few minor setbacks and help from the plumber and carpenter, we managed to process our first film automatically.  We ensured that Joseph, the X-ray technician was happy with the processing of films, mixing of chemicals and maintenance of the processor.

Much of our evenings were devoted to paperwork needed as proof of safe practice by the AEC.  We were relieved to discover that Kamuli have employed a qualified radiographer for 2 days a week specifically to improve the X-ray service.  This therefore made our work much easier as we discussed with him the issues and found he was already dealing with many of the problems highlighted by the AEC. 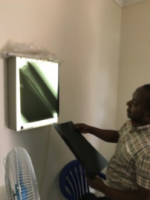 Anne focused her efforts on the ultrasound service and spent time with William the ultrasonographer.  He received training on the portable ultrasound machine, which has the advantage of having a colour Doppler facility for the visualisation of blood flow which was not available on the machine he is currently using. 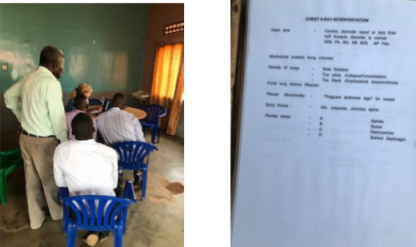 Anne also spent time trying to mend an existing ultrasound machine.  This involved contacting colleagues at home for advice but unfortunately this was without success.  It also stressed the need to protect the machines from power surges which frequently happen due to the power cuts and use of generators.  We provided a power surge protective adaptor for the machines to be plugged in to.

A main area of concern in ultrasound was infection control.  There was no regular cleaning of the ultrasound department.  The sink had no water supply, which meant hands could not be washed.  The probes on the ultrasound machine were also not cleaned between patients.  We provided a pH neutral solution and cloths to enable cleaning of the probes.  We have left further recommendations to help with infection control issues.

At the end of our visit, we composed a letter to the Atomic Energy Council detailing the improvements that had been made to meet their requirements. 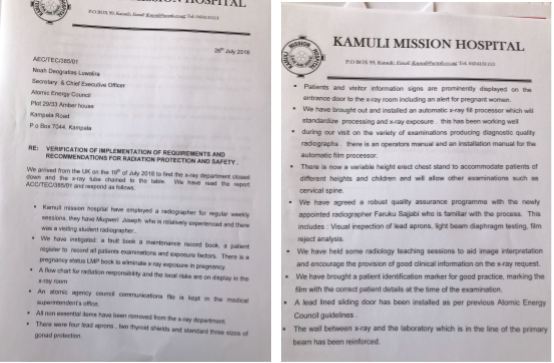 Although our visit was relatively short, we managed, with a lot of help from the staff at Kamuli, to hopefully bring the department up to the standards demanded by the Atomic Energy Council.  This will ensure that the hospital now has improved and safer X-ray and ultrasound facilities.

We would like to thank all the staff at Kamuli for being so helpful and welcoming, especially Dr Andrew Muleledhu (Medical Superintendent) and Father Emmanuel (Hospital Administrator) for facilitating our many requests for help.